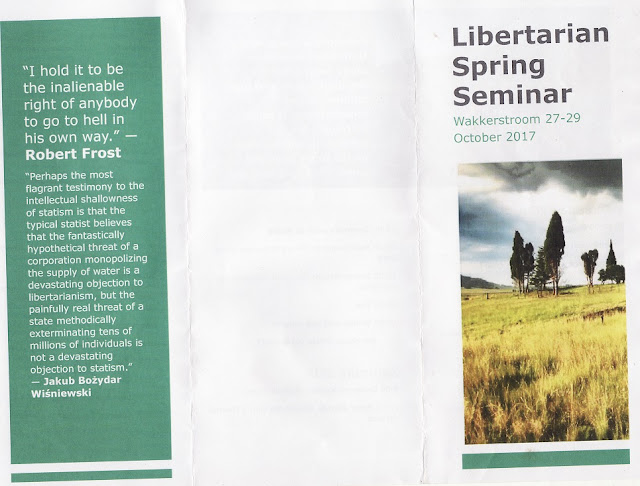 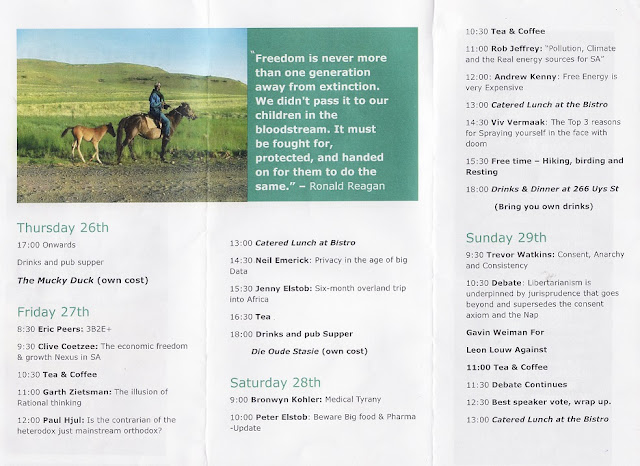 
The registration which includes 3 lunches, teas and coffees is R450 per person.
Leon and I will be hosting all of you who want to come for dinner on Saturday evening. If you want to join us for Saturday dinner please add R50 to your registration i.e. R500 total.
I am organising for us to meet at The Mucky Duck Thursday evening, it is a pub and offers pub meals — I will chat to them re what should be on offer and give you the cost.
Friday evening I plan for us to go to Die Oue Stasie, similar to Mucky Duck with a pub and light meals.
Saturday will be at our place — 266 Uys St.
I will leave Saturday afternoon open for hiking or birding. I can organise a birding guide if anyone wants one. It should be very beautiful that time of the year, though we find it beautiful all year round!

“The State is a condition, a certain relationship between human beings, a mode of human behavior; we destroy it by contracting other relationships, by behaving differently.”
Gustav Landauer

What does it mean to be a libertarian?.  Not much, really. You probably have reasonably strong opinions on the non aggression principle and on consent. You are probably uncertain as to whether you would prefer a minarchy to an anarchy. You have been to a few libdins and a couple of libsems.  if you are really keen you comment and post on various libertarian email groups & blogs.   Perhaps you work for a libertarian think tank , but more likely you don't.

You are probably reluctant (if not outright embarrassed) to share your libertarian views with non libertarians in your family and amongst your colleagues. Your friends regard you as somewhat obsessed, a bit of a fanatic, perhaps even a geek. You would have trouble recognising another libertarian in a crowd.  If you do encounter another libertarian you probably have major disagreements with them on many minor points of policy.

I would like to suggest that as committed libertarians we come out of the closet. That we proudly proclaim who and what we are and dare anyone to disagree. That we stop apologizing, stop explaining, and start proclaiming. I propose that we form a league of hardcore libertarians and start recruiting members.

Why? What would be the point? Libertarians are a fringe group, with no clear identity. Currently the best definition of a libertarian is an individual who favours Liberty. That includes just about everyone.   Most of the time we say that we believe in individual Liberty without really understanding the full implications of that statement.
We don't belong to anything. We don't know who our comrades are. We don't know what we believe, much less what they believe. We have not fully thought through the consequences of our beliefs. We make no stand, we take no risks, we have no loyalties. We live in constant fear of the authority we so despise. And when push comes to shove, we stand alone.

What would this league involve? I'm thinking of a structure like a motorcycle gang. We would have a cool name. We would have a sexy logo. We would have challenging entrance qualifications. We would have an explicit and uncompromising statement of beliefs and principles to which members would have to conform. We would clearly state the implications and consequences of our beliefs without apology or embarrassment.

Membership would involve commitment and sacrifice. The entrance fee would be high. Members would need to get a tattoo, as evidence of membership and proof of commitment. . Members will be entitled to wear a cut (a denim jacket) with the League logo sewn on, and to wear a patch reflecting their status. Members must swear to come to the aid of fellow members in distress. Decisions will be made democratically but once made must be adhered to by all members. Failure to comply may result in expulsion. Owning a motorbike would not be obligatory, but would be way cool.

What are the benefits of membership? You belong to an “in” group, like the Freemasons, or the Skull and bones, or the Hells Angels.  In theory, libertarians would not belong to any club that would have them as a member. While it is fine to be an unherded cat, it is lonely and sometimes pathetic.  You get no respect. You have no back up. You are at the mercy of all the other better organised gangs, like traffic police, tax collectors, common criminals and the rest. You enjoy a strong sense of camaraderie. When you are attacked, you will be avenged. And, of course, membership is entirely consensual, like an anarchic covenant.

Full Disclosure. I have been watching the TV series Sons of Anarchy and this has certainly influenced my thinking.  I do not endorse nor agree with the violent and psychopathic behaviour exhibited by some members of this fictional gang.  However, much  of their violence is in reaction to attacks upon the gang, and can be viewed  as retaliation, rather than initiation of force.  The gang is basically a business involved in the sorts of activities that anarchists and most libertarians would not regard as forbidden. They trade in guns, in drugs and in sex, with some automotive repairs on the side. These are activities which would be acceptable in a libertarian Anarchy, even if perhaps uncomfortable for some.

How would this happen? I have a name, Consent and Anarchy League.  I  have a logo.

I have a charter,  the Consent Axiom.  I suggest an entrance fee of R1000 plus a photo of your tattoo, preferably on your right shoulder.  The R1000 gets you a sleeveless denim jacket with the logo sewn on the back, and patches on the front, plus a T-shirt. It gets you a list of other members. It confers voting rights at gatherings. It also gets you a list of acceptable and unacceptable behaviour. It might even include a secret handshake.

There is already a Libertarian Motorcycle club, with chapters all over the world.
Would you be interested in becoming a CAL member?

Libertarianism in South Africa dates back to the mid 1970’s when Leon Louw, Marc Swanepoel and several others got together informally to discuss this new and interesting philosophy. One result of this cooperation was the formation of the Free Market Foundation. Regular weekly meetings were held at Leon Louw’s house in Dunkeld to which an enthusiastic group of early libertarians were invited. Leon's wife, Francis Kendall, published a monthly magazine called The individualist which was circulated around the group.  in 1985 a subscriber to The individualist, Ria Crafford,  suggested that a seminar be held at which libertarians from all over the country could gather.  This led to the first libertarian spring seminar being held on the farm Nebo near Ficksburg  in the Orange Free State in 1985.  Following the success of this seminar, Trevor Watkins,  Charl Heydenrych and Peter Kidson got together to organise the second Seminar at Mont-aux-Sources in the Drakensberg.  A libertarian spring Seminar has been held every year since that time with the single exception of 2010.

Following the reforms in South Africa in 1991, Leon Louw and Francis Kendall published a seminal work entitled “South Africa the Solution”. This led to the formation of the Groundswell movement which was active prior to the 1994 elections. Trevor Watkins, Clare Emary and Charl Heydenrych formed the KISS party prior to the 1994 elections,  which then resulted in the formation of the Federal party led by Francis Kendall. In 2013 Barry de Harde, Charl Heydenrych, Trevor Watkins and Enyinna Nkem-abonta got together to form the Libertarian Party of South Africa, which was inaugurated at the 2013 Seminar in Prince Albert.  The Libertarian Party was registered as a formal political party in 2014 but did not contest the 2014 elections due to the high cost of participation. The party is currently inactive.

There are numerous other libertarian groups, websites and activities across South Africa. A comprehensive list of these groups appears in appendix 1.

Do we have a problem?

How do we solve this problem?

I think that we must select a common platform for presenting the multiple options for libertarianism in South Africa. I think Wikipedia will provide that common platform.  The existing libertarian products can all continue to exist in their present form without modification. However the single Wikipedia platform will allow new visitors to evaluate which sites and subjects they wish to be involved in before actually visiting them.The administrators of the various sites will be able to maintain and update the links to their content on the Wikipedia page.  Hopefully this will also lead to increased interest in all the sites as a result of their easier and simpler access.

I think that the various current libertarian groupings should  co-operate and collaborate with each other. We should share membership details across the various platforms to ensure that we are able to communicate with all South African libertarians. We should contribute intellectual material to each others blogs and share our resources. Where possible we should attempt to attend each others gatherings such as conferences, seminars and monthly gatherings.

Are the woke really that bad?  In these surreal times, it is time for another reality check. It is easy to demonise the left as violent an...