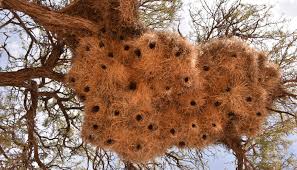 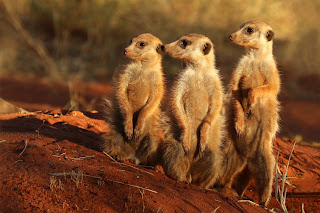 There is a small valley somewhere in Africa where a colony of meerkats live close to a large nest of social weavers. Each group has been quietly filling their destiny in the way nature intended, for many generations. The meerkats do not particularly like the weavers, regarding them as noisy, untidy and annoying, while the weavers think the meerkats are weird, anti-social and disapproving. Nevertheless they have got along side-by-side for generations, mostly by avoiding each other.

The meerkats often scatter seed around their colonies, which the weavers eat and enjoy. The meerkats also keep the area clear of snakes, which are the weavers' worst enemy. In turn, the large weavers nest provides welcome shade on the hot days, and the birds do provide early warning of approaching predators.

But times change, and a new and unsettling cloud of meaning drifted over the valley, driven by the winds of change blowing throughout the world. Phrases like “the majority shall govern” and “the poor and oppressed must rise” were heard in dark corners from odd folk who did not live in the valley. With their aristocratic bearing and independent lifestyle, the meerkats were quickly regarded as the enemy of the working classes, who were best represented by the weavers who worked long hours to erect great nests for the general good. After a few unpleasant incidents, a meeting of all the valley residents was called to discuss the “emergency”. The weavers liked the idea because they constituted the majority in the valley by far, while the meerkats were perfectly happy with the way things had worked in the past and saw no need for change. After days of talking and twittering, and several walkouts by the meerkats, it was decided to hold an election to elect a parliament and leaders for the valley.

Since the weavers outnumbered the meerkats 10 to 1, it was not surprising that they won the election hands down, and the majority of the seats in the new parliament. The meerkats were mildly horrified but did not know what to do - it all seemed reasonable and fair and democratic. What's the worst that could happen, they asked themselves.

Although the weavers liked the idea of being in charge now, they had no idea of what they were supposed to do next. Weavers weaved, meerkats burrowed, life went on. But soon the same odd folk who had suggested the election started suggesting some rules the weavers could pass. The meerkats could be obliged to put out more seed under the weavers nest, for the “good of the community” and to pay their share of the administration costs of the new government. When they passed this law, by a large majority, with only meerkats dissenting, pretty much nothing happened. This annoyed the bureaucrats amongst the weavers. At first they tried to get weaver birds to dive bomb the meerkats, but the meerkats just laughed this off. So the weavers made a deal with their arch enemies, the snakes, to enforce the weavers’ laws, in return for first pickings on any illegal meerkats. Pretty soon it was simpler for the meerkats to comply with the extra grain allowance than lose members to the snakes.

And so it carried on - the weaver parliament passing ever more intrusive laws, generally to the disadvantage of the meerkats. All entrances had to be entered from below - just like a weaver's nest, but insane for a ground dwelling meerkat. All nests were limited to a maximum size, which just happened to be the size of an individual weavers nest, but was hopelessly inadequate for a meerkat warren. When the meerkats appealed to the weavers to just leave things the way they had always been, the weavers told the meerkats they were anti-democratic, unprogressive, and worst of all, conservative. The peace and cooperation of the little valley was shattered, in the interests of the common good.

Of course, after a few months of this, the meerkats just abandoned their warren one night and moved away. The weavers were enraged and passed many resolutions condemning this selfish behaviour, to no avail. The weavers had become used to their extra ration of seed, which was no longer available. Worst of all, the snakes which had been kept busy enforcing the rules on the meerkats now had nothing to do, so they went back to their old ways of attacking the weavers nest. Soon, the weavers nest fell into disrepair and began to crumble.

And the moral of this story? A majority confers no moral authority, it is just a majority. Individuals do best when left alone to compete for themselves using tried and trusted approaches. What works for a weaver does not necessarily work for a meerkat, or anyone else. Individual choice is more important than collective good.
Posted by Boz at December 18, 2019 No comments:

What is the Individualist Movement Discord server?

The Individualist Movement Discord server gives a home and a voice to those individuals who agree with these ideas. The purpose is  to prov...