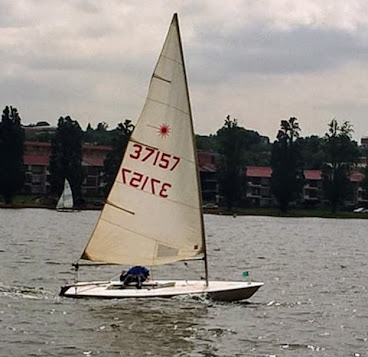 Yachting has been one of the great pleasures of my life. It is mostly a contest between yourself and the elements. Yacht racing pits you against these same elements, and against often unseen and distant competitors. There are no referees, or coaches, or managers. You are expected to be honourable, and disputes are settled after the event by a jury of your peers. There is a thick book of rules, which some sailors use to their advantage.
Frustrated by the innumerable and finicky rules, I donated a trophy to my local yacht club for a race to be sailed once a year. The race, known as the Avoid Collisions race, has only 2 rules:
Most fellow sailors were extremely sceptical but curious enough to give it a try. At the first outing our most enthusiastic sea-lawyer tried to debunk the concept by colliding with everyone he could reach. This meant he had to keep taking penalties, and so made little progress in the race. Other sailors quickly realised that their best strategy was to stay far away from competing boats, and sail as fast as they could. There was no advantage in trying to exploit the rules. The sea-lawyer languished at the back of the fleet, eventually giving up.
Both I and some other sailors realised that this was quite a profound strategy, not just for yacht racing but also for life.The race became a regular fixture. Of course, some others hankered for the security of a thick book of rules which they could exploit.
Over the years I have encountered many rules and suggestions for living a good life. Confucius, Marcus Aurelius and more recently Jordan Peterson have put down in words their brief and pithy suggestions. Life is complex and one is faced with many challenging situations and difficult decisions. It is often useful to have a rule of thumb to advise you on the way forward.
These are my 4 simple suggestions for a better life:

Collisions are expensive, damaging, time-wasting, not just in yachts and cars. Yet you are often advised to stand up for your rights, to hold your ground, to never back down. In many cases one's first instinct is to tackle a problem head-on, be it a person or a circumstance. So often your courage and your pride and your self-esteem is at stake. But as in the yacht race, if your goal is to win the race, then your best strategy is to avoid collisions and sail fast.
Always keep your eye on the prize. Always ask yourself what you are trying to achieve, honestly and with insight. Then ask yourself if your current course of action will lead you closer to that goal. Are you seeking attention or a solution? Are you willing to act anonymously? Is your goal remotely feasible? Can you only win if others are defeated?
There is no shame in having mercenary goals, but there is shame in pretending your motives are altruistic.

Consent is the basis of the Individualist Movement philosophy, and of the American constitution, and of civilised society.
No one should act against an innocent person or their property without their consent.
To act without consent is to invite conflict, it is immoral and unethical, it is evil.

Most modern governments ignore consent while imposing authority. Modern democracies impose the will of the majority on minorities without seeking their consent. Most impose tax without consent. Everyone is subject to a myriad of rules and regulations to which they have never consented.
Usually it does not pay to fight city hall. Rather just ignore as much authority as you can while carefully avoiding collisions. Take tax avoidance measures, don’t pay fines until forced to, don’t obey stupid rules. You can usually rely on the incompetence of the state to overlook or forget you.
Free markets do not rely on authority but on individual choice, freely exercised.

The world has been swamped by insane Covid restrictions imposed by authorities gone wild. The trick is to ignore the authorities as much as possible, while avoiding unnecessary collisions.
Posted by Boz at February 07, 2022